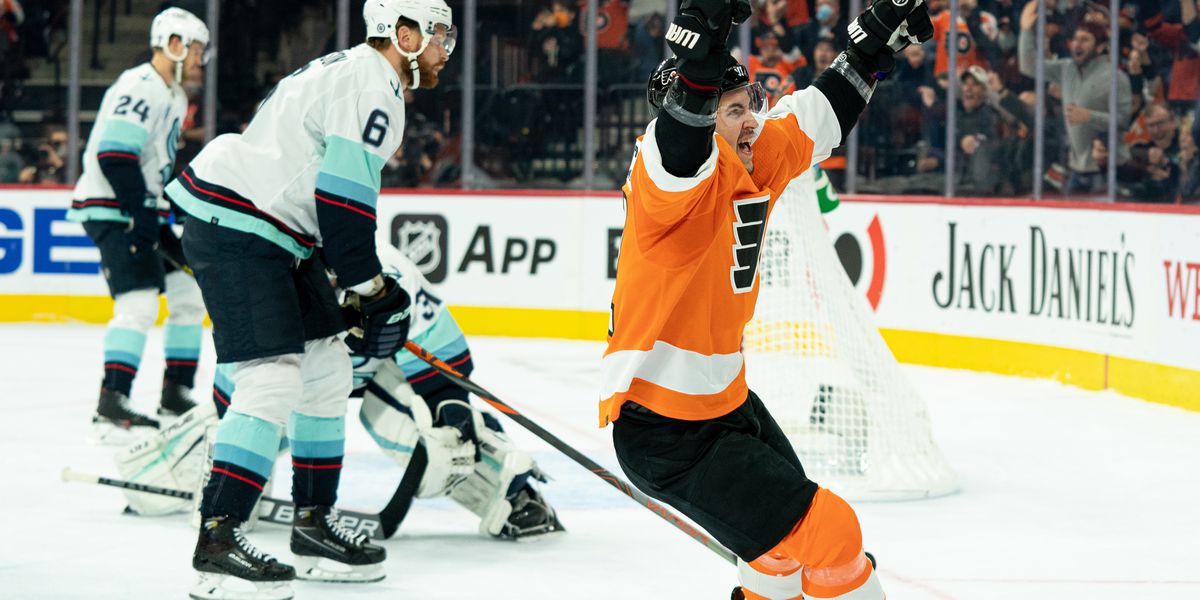 
As resounding a win as you’re going to find, folks. After a frustrating season opening loss, the Flyers more than made up for it with a dominating performance vs. the league’s newest team in the Seattle Kraken.
First Period
Well, this game certainly didn’t start the way the Flyers would have liked. To their credit, the Kraken came out absolutely firing on Carter Hart and the orange and black. Their forecheck was tenacious and gave most of the Flyers’ blueliners fits, and the forwards really weren’t able to do much with some stifling backcheck facing them.
As the period progressed however, the Flyers slowly began to find their footing and in large part due to the sensational work of Hart. After his shaky opening start, there were some reasons for concern heading into tonight’s game, and in the first 20 minutes he silenced them. Hart made save after save, including this one that truly swung the momentum.

After this save the Flyers began to take advantage of the aggressive Kraken forecheck, and the goals came pouring in. It began with the captain Claude Giroux who received a drop pass from Travis Konecny, and sent this puck to the damn shadow realm.

The second came from, fittingly, Konecny. Keith Yandle made a heads-up play faking the dump in, found a darting TK up the middle, who fired a shot that was stopped by Grubauer but the same could not be said for the rebound. Konecny won the race to the loose puck and fired it by the Kraken netminder.


What a pass by Keith Yandle to Travis Konecny, who does the rest! pic.twitter.com/EOn99cP2Of— Ryan Gilbert (@RGilbertSOP) October 18, 2021

The trifecta came from one of the newest members of the Flyers, Derek Brassard. As our beloved Jim Jackson loves to say, the epitome of a “dirty but good” goal as he fired a sharp angle shot that went off of Carson Soucy. Brassard and his entire line played an overall strong period, and it was good to see him get his first as a Flyer.


Derick Brassard gets his first as a Flyer thanks to a friendly bounce in front! pic.twitter.com/n5ql1idCAr— Ryan Gilbert (@RGilbertSOP) October 18, 2021

Second Period
As Flyers fans, we all know how Dave Hakstol teams operate. They get their asses handed to them for the first 20 minutes, then the comeback starts, which inevitably fails nine times out of 10. But, the hope of course was to stop the comeback before it even started with a strong start to the second period.
Well, they survived a brief push from Seattle before beginning the slaughter. It was another newcomer giving the Flyers a 4-0 lead, this time Ryan Ellis joining the rush and receiving a perfect pass from Brassard and finishing the deal. Ellis looked great on Friday night, and he had himself another game tonight that reminded us why Chuck Fletcher got him.

But friends this is when you knew this game was getting weird, JVR received a puck at the blue line, waited, found a darting ... BAH GAWD WAS THAT JUSTIN BRAUN???
It was! Braun joined the rush and netted the twine to make it 5-0 Flyers.

Then things got really wild. Nate Bastian, trying to ignite a spark or whatever, decides to go after Giroux. Which ... I gotta admit pal that’s just a stupid idea. Those two go off for roughing each, then Nicolas Aube-Kubel takes a horrific penalty and rightfully so the Kraken are pissed. Nick Seeler quite literally moved the referee out of the way to fight Jamie Oleksiak who needless to say has quite the size advantage. Seeler did not win the fight by any means, but major props to the dude. He was fun in preseason, he was fun Friday, and he was extremely fun tonight. I mean look at this dude:

The rest of the period would be tame however, minus a goal from Soucy to put the Kraken on the board.
Third Period
The Flyers began the final 20 by killing off the rest of a Kraken power play, and then getting one themselves via Konecny drawing a trip. Despite a few grade A chances they were unable to find the back of the net.
But someone who was able to find the back of the net shortly thereafter was Joel Farabee who netted his second goal of the season and his second point of the night. This second line was buzzing all night long.
Yes, pun intended, always pun intended.

So remember the whole Bastian/Giroux thing from earlier? Yeah, Nate Thompson took care of business. WE GOT NATE ON NATE CRIME.

Something that has been so refreshing about Alain Vigneault, especially compared to Dave Hakstol, is the tendency to still push despite being up late in games. The Flyers had this game in hand for much of the second half, but even with that, they were forechecking and pushing play right at the Kraken. No lead is big enough for this squad, and it’s fun to watch.
The Flyers would finish off the final minutes and grab the first win of the season in resounding fashion, and they’ll look to carry this momentum into a showdown with the Bruins on Wednesday night....