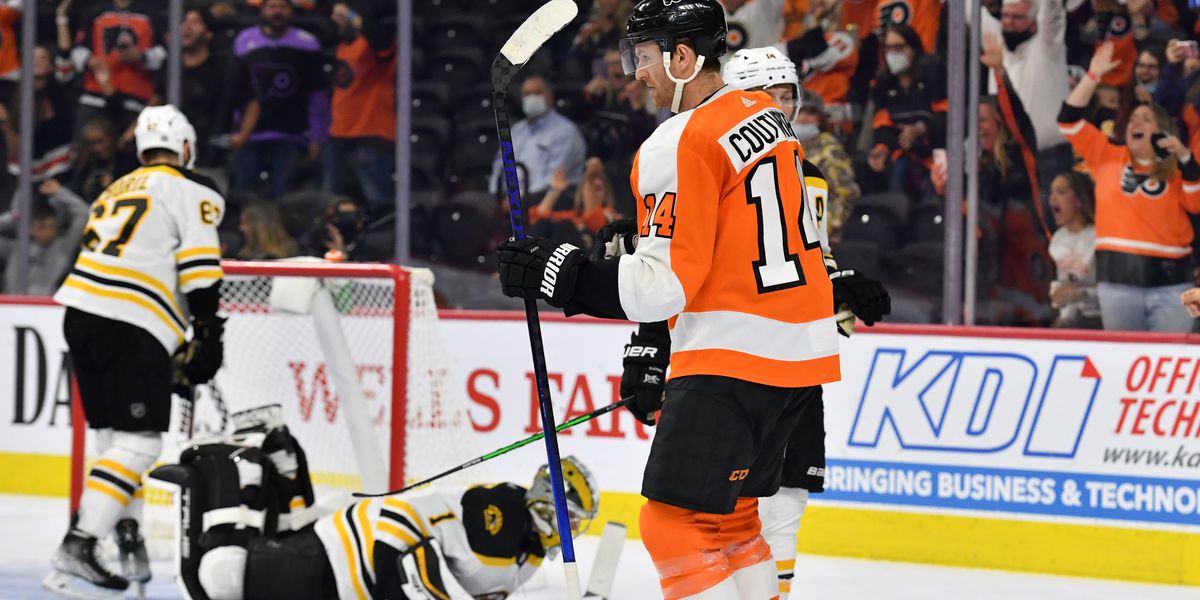 
Some observations for your morning… They picked up their first win of the preseason on Saturday, and since that dam was broken, the Flyers seem to be rolling here. They faced a lineup of effectively, if we’re honest here, Providence Bruins, and while goaltender Jeremy Swayman once again gave them a lot of trouble, the Flyers put together a pretty dominant effort, kept their heads down, and picked up a win in overtime. They were without a number of what should be their regulars, but they still looked sharp all the same, and there was a lot to like in this showing.
All stats via Natural Stat Trick.
Life is still pain, even in preseason
We alluded to this in the introduction, but the big takeaway from this one was just how much the Flyers were able to generate in the way of offense in this one, and how often they found themselves foiled by a bit of very good (or sometimes just very lucky) goaltending on Swayman’s part. Because the Flyers dominated this game offensively pretty much right out of the gates, and while them having quite a few power plays to work with (more on that later) certainly did help that, their efforts at 5-on-5 were equally strong. All told, they came out of this one with an adjusted 55.26 CF% and 55.88 SCF%, really having gotten the better of their matchup.
Now, is this exactly the kind of effort and result we would have hoped for in this game, given the lineup that the Bruins dressed? Well, yeah, kind of. But beggars also can’t be choosers, and if the preseason is about just getting everyone going again, this is they type of game that certainly helps with that, so we’ll take it.
Power play frustrated
The power play got a whole lot of work in last night—just under eight and a half minutes in total—and while they were able to put in some good work, the results just weren’t coming for them. Indeed, the Flyers put up a total of 24 shot attempts, 12 shots on goal, and seven scoring chances on the man-advantage, and were moving the puck around so well that at times it looked like they were just toying with the Bruins out there. But in the end Swayman was the real difference maker, and was able to keep the Flyers pretty well contained. They did pick up one goal on the power play though, care of Sean Couturier, and it was a nice one.

Obviously this also wasn’t their regular mix, or what should be to start the season, so we’re going to resist getting too fussed about them having a bit of a tough showing results wise. It’s annoying, we can say that, but we'll move on.
NAK is back (sorry)
One of the biggest standouts of last night’s game was far and away Nicolas Aube-Kubel. He’s been having a quietly very solid preseason on the whole, but last night saw him bring a good bit more flash to the mix. There was the physical edge that still manifested, and he was skating well and looking effective in transition, but his offensive game also really popped in this one—he led the team in shots and scoring chances at 5-on-5, with five and three respectively. He wasn’t rewarded for that good work with any points, unfortunately, but the fact remains that everything really seemed to be clicking for him in this one, and he looked flat out dangerous.
And this, of course, is excellent news. Last season was a tough one for him, but in his run the season before, he looked extremely effective, and now it looks like he’s rebounding and getting back to that old form. That’s great for him, but even better for this Flyers team that’s had its depth take a real hit with injuries. If he can keep this rolling into the regular season, things are looking up.
Elliot Desnoyers debuts
And a bit of a fun surprise from this game was that Desnoyers, back after offseason hip surgery, Desnoyers was able to make his debut with the Flyers, and he had himself quite a solid game. He was put in a pretty nice spot, centering James van Riemsdyk and Aube-Kubel, and even getting a bit of time on the power play to work with, and he seemed to run with that chance. It wasn’t a perfect showing, he certainly was still getting adjusted to the pace of play on the fly, but he had some really nice moments. He brought good speed and physicality, looked good on the forecheck, and had one really nice look on the power play, but he just rang his shot off the crossbar. And hey, he even got into a fight—the first of his whole career, even in juniors, he told us after the game—to try to spark his team. He certainly had an active showing, and it was, frankly, pretty fun.
If nothing else, this was a solid introduction of himself to the fan base. Desnoyers is an interesting, if somewhat under the radar prospect, but maybe not for long at this point.
Carter Hart check
And finally, the question of the hour—how’s Hart holding up?
Hart didn’t really have a tremendous workload in this one (particularly early, as the Bruins only managed four shots in the first period), but his results were still good overall. His reactions were sharp, he was tracking the puck well, and not leaving too many dangerous looking rebounds for the Bruins to work with, it was quite a settled game that he brought. All told, he faced 25 shots, and only allowed one goal. And, in all fairness, it was a weird one—there was sort of a scrambly breakdown in front of the net on a Bruins power play, and Jack Studnicka was able to pick up the loose puck right in front. Not a whole lot Hart could have done there, reasonably.

Overall, he had another quite solid game, and it’s continuing to put at ease some of the concerns that may have been had about him coming into the season. It’s still a small sample that we’re looking at here, but as long as Hart keeps putting together these solid showings, the more comfortable we’ll feel starting to think that he’s back. ...