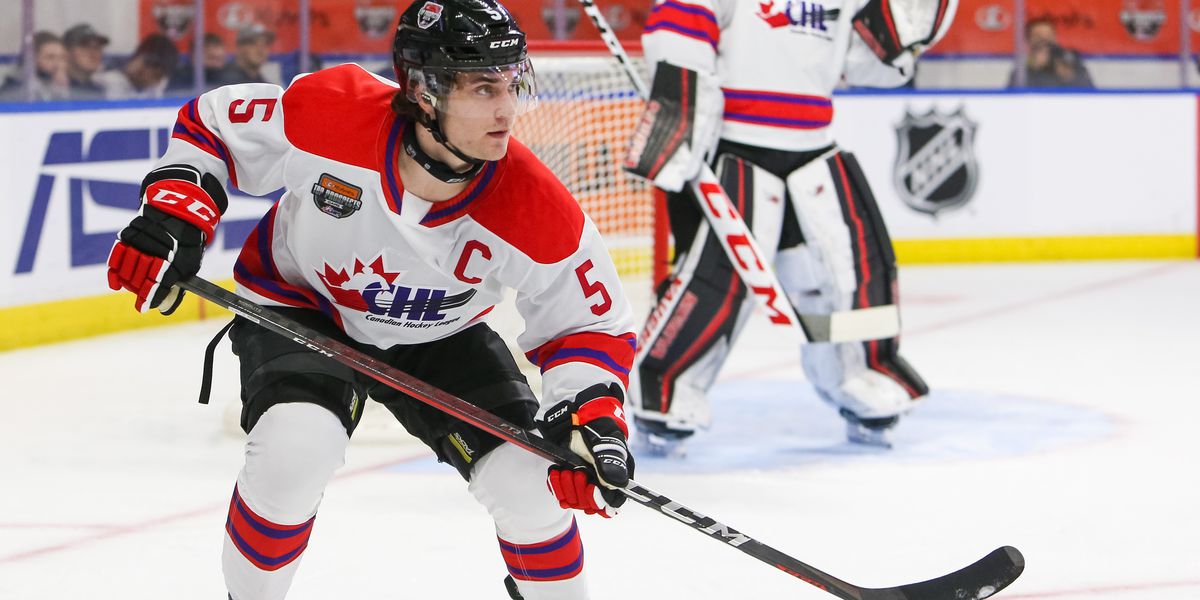 
A chaotic blueliner is up next. Do you like watching blueliners just rush up the ice with no hesitation? Do you like it when defensemen are comfortable in possession of the puck and will drive play with individual efforts? Do you want to grip the arms of your chair so damn hard that whatever fabric falls victim under your fingertips starts to peel away from the frame? Well, you’re going to love Denton Mateychuk.
It is not that Mateychuk struggles or goes too far deep into the offensive zone, but everything is done with some semblance of poise and calmness, while also freaking the hell out because he just wants to do everything all at once, all the time.
He’s fun and modern and someone who everyone needs to watch.
BSH 2022 Community Draft Board, No. 22: Denton Mateychuk
2021-22 Season
Team: Moose Jaw Warriors (WHL)
Statistics: 13 G, 51 A, in 65 GP (WHL)
Pre-Draft Rankings
No. 14 (NA skaters) by NHL Central ScoutingNo. 10 by Dobber Prospects (April)No. 13 by Wheeler/The Athletic (midseason)
What’s there to like?
To have the ability and mentality to be as active as Mateychuk is, you have to have a heaping pile of tools to pull it off. The young blueliner is already considered a skater beyond his years, being able to take strong strides up the ice and be elusive enough to get by opposing defenders, while also being explosive enough to cover defensively.
In terms of just draft-y stuff, Mateychuk was born in July, which means that if he was born just a few months later, he would be only eligible for the 2023 NHL Draft. This extra bit of time is something that is taken intro strong consideration by teams and scouts alike, as he has had less time than some of his fellow top prospects to mature and develop — you’re buying an outrageous amount of potential and someone that should at least contribute at a top level on his skating and awareness alone.
What’s not to like?
For any team that would rather have a safe blue line, and not one that would be desperate to be handed a green light to be active on the ice, by their head coach, Mateychuk would not necessarily be the preferred prospect to pick. It is all about translation and projection — because why draft a player just based on what they are currently — so if a team reasonably thinks that Mateychuk’s ability tops out as a powerplay contributor that is just okay at even strength, then maybe he isn’t the pick for them.
How would he fit in the Flyers’ system?
Aside from Cam York, the Philadelphia Flyers are severely lacking when it comes to young defensemen that can make plays and be responsible enough defensively to eat up any minutes that get handed to them. Mateychuk would add a different dynamic to the future Flyers blue line and is someone that fans would be penciling in as a top-four guy for the next decade. He might just move this blue line into the modern era.
Could the Flyers actually get him?
With the fifth overall pick, it would be a bit of a reach, but if there is some sort of trade up GM Chuck Fletcher’s sleeve that nets them a late-first, then Mateychuk might just happen to be there. If not, then some other team will snag him before the second round is even thought about.
We’ll make one addition to the poll:
Kevin Korchinski — D, Seattle Thunderbirds (WHL) — 4G, 61 A in 67 GP
Long, smooth-skating, point-per-game defencemen never last long in the draft, and Korchinski won’t linger unpicked. I think he’s in the same tier and conversation as Mateychuk, even if he slots five spots lower. He was one of the most improved players in the draft this year as he settled into an ambitious, free-flowing game that reminded a little of Stars first-rounder Thomas Harley at the same age, and his June birthday should give him even more runway next season. He handles the puck smoothly on his hip, his impressive footwork and maneuverability help him adjust to, away, and around pressure, and then he reads and anticipates the play at a high level so that he can make something happen out of all of his movement and carries. — Scott Wheeler, The Athletic