Will The Chicago Blackhawks Be A Playoff Team This Season?

from Ben Pope of the Chicago Sun-Times,


After a frenzied offseason of transforming the Blackhawks’ roster, the general manager appeared just as calm and stoic as usual Monday, discussing the many trades and signings as the action begins to subside.

“What we’re hoping for is a competitive team that’s pushing for playoffs,” Bowman said. “That’s why we all do this. Certainly, some years it’s more likely than others...[and] this year, we’re looking to take a step forward. There’s a lot of reason for excitement and optimism.”

Less than a year ago, Bowman spent a busy week waving the white flag on the team’s aimless 2017-to-2019 maneuverings and committing to a more cohesive, targeted rebuild.

Bowman admitted this summer’s spending spree — which has brought in Marc-Andre Fleury, Seth Jones, Caleb Jones, Jake McCabe, Tyler Johnson, Jujhar Khaira and counting — wasn’t exactly “mapped out back in October.” But the Hawks’ offloading then was apparently intended to “set up an environment” to make this possible now.

“We’ve been trying to position ourselves to have flexibility to be nimble enough to make strategic additions at the right time,” he said. “But it doesn’t really change the path we’re on. We still want to...continue to see our young players grow. If anything, we’re trying to surround those players with stronger players, to give our team more confidence that we can grow as a group.” 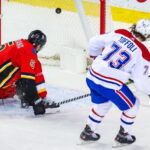