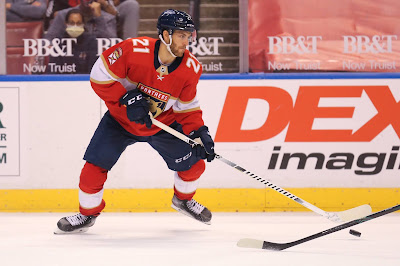 Alex Wennberg saw his career rejuvenated in Florida this last season. The former 14th overall pick's performance was dropping like a stone in Colombus, going from his career-high of 59 points to a mere 5 goals and 22 points before leaving the team. Upon arriving with the Panthers, Wennberg found his scoring touch again, potting 17 goals and 29 points in 56 games, a 43-point pace in a full season. Not bad for a guy making $2.25 million.The Panthers are not in tight for cap space at the moment, but they need to keep their future in mind going forward. Next year captain Sasha Barkov is going to be a UFA, along with Frank Vatrano and Noel Accari. They may also want to consider hanging on to Sam Bennett after the performance he put on following his trade out of Calgary. All this, and the odds of getting Wennberg for the same low price and term are slim. He's had his "show me" contract, now he's going to want to get paid. Assuming Florida passes giving him a new contract, here are 2 teams that could sign him.Montreal CanadiensPhillip Danault put on a defensive clinic during the Habs playoff run this year, establishing himself as one of the best shut-down centres around. Unfortunately for Montreal, Danault is a UFA this summer and is going to command a serious raise over the $3.08 million he made this season. Can the Canadiens afford it? Maybe, but if not, Wennberg would be a solid second option and would come in at a lower cost. Obviously, they'll be sacrificing some defence, but that will be the case no matter who takes Danault's spot. The difference is, Wennberg is capable of making up for it with goal scoring.Minnesota WildKirill Kaprizov's stipulation to signing long-term with the Wild was that the team needed to upgrade their depth at centre. The Wild responded by signing Joel Eriksson Ek to a long-term deal at a fair price, locking up the Selke candidate for 8 years. That's a good start, but it isn't exactly an "upgrade." Eriksson Ek played in Minnesota last year. Wennberg, on the other hand, is a legitimate improvement on the team's current depth down the middle. He brings scoring, size, and experience to the team, and will only be 27 years old at the start of next season. He would make the Wild a much greater threat outside of their top line and would take some of the scoring pressure off of Kaprizov. Plus, he'll come in relatively cheap compared to some other free agent centres out there.Who do you think should go after Wennberg this offseason?Photo credit: Sam Navarro-USA TODAY Sports...