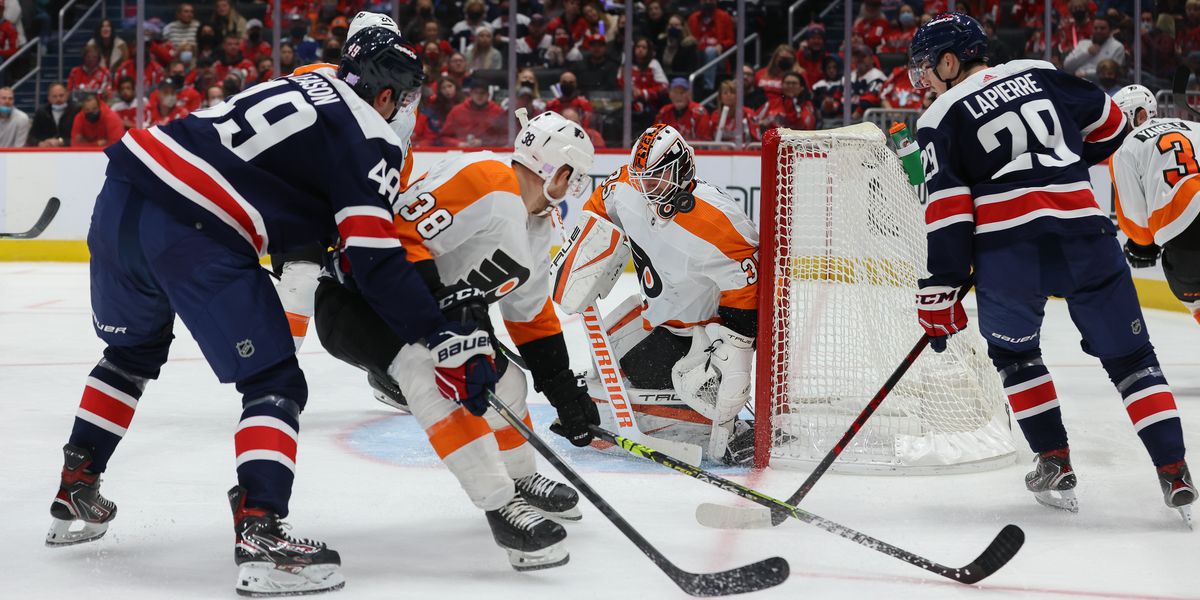 
Some observations for your morning... We’re back, and back on track folks! After a tough showing against the Penguins on Thursday (where they did still manage to pick up a point, we should note), the Flyers were back at it again last night against the Capitals, and they brought a pretty positive showing. Picking up the lead in the second period with goals from Derick Brassard and Sean Couturier, they were able to hold onto that for the rest of the game. It wasn’t without a bit of drama, as the Capitals really surged in the third, but the Flyers were able to weather the storm. Not too bad indeed.
All stats via Natural Stat Trick.
Cleaning things up
The last few Flyers games have been pretty decidedly messy. They haven’t been very crisp in their details, struggling to complete even short passes and falling victim to committing ugly turnovers. And with an offense that was already cooling off, it was a recipe for disaster.
They tightened up quite a bit in this showing. They were cleaner in their passing movement and quicker on loose pucks, winning more battles this time around. It was a more complete effort, and they really reaped the benefits. The Flyers put up an adjusted 57.58 CF%, 55.1 SCF%, and 54.53 xGF% at 5-on-5, winning their matchups pretty handily. It wasn’t a perfect showing, and the Capitals were able to get themselves back into the game late in the third period with a bit of a push, but what the Flyers did was enough to hold them off and secure their win. We were hoping that they could right the ship in this one, and they took a solid step towards doing that here.
Second line rolling again
It’s been a rough go for the second line over the last few games as things stalled for them, and it looked like they were coming back down to Earth after an absolutely torrid start. If we were concerned about them being a liability until Kevin Hayes gets back and some line shuffling could be justified, they put in some really good work last night to ease those fears.

They put up one goal, and it was a nice one. It was a hard working play for Brassard, who started the play up leading to his goal after winning a puck battle, and he really needed this one. But it was a strong showing for the whole of the line, as they were able to get back to the cycle game that had them looking so dangerous in the earlier parts of the season.
If we want some more good news, it’s that the line didn’t get caved in by the underlying numbers in this one either. They put up an adjusted 81.56 CF% and 79.75 xGF% at 5-on-5, which is almost laughable with how good it is. Now, we don't expect them to be able to keep cruising at that level going forward, particularly with how they've struggled to drive play up until this point, but seeing them get the better (very comfortably!) of their matchup on all fronts was certainly a welcome sight.
The second pair too!
It’s no real secret that the second pair of Travis Sanheim and Rasmus Ristolainen hasn’t really been working so far this season. Their defensive zone coverage has left a bit to be desired, and some of their gaffs as they’ve fed each other’s weaknesses have been... ugly. But they had themselves a good game last night, with the two settling in a bit and being able to put up solid underlying numbers in their matchup (65.64 CF% and 79.93 xGF% for Ristolainen and 62.00 CF% and 78.50 xGF% for Sanheim at 5-on-5).
The most encouraging piece we got, though, was from Ristolainen specifically. His start to the season has overall been pretty ugly, if we’re honest, but he did put together quite a solid showing in this one. He was physical, which isn’t new, but he was physical without being reckless and taking himself out of position on plays. He was aggressive in the offensive zone—again, without being reckless—and for that he was also rewarded with his first point as a Flyer on Couturier’s goal. We’re hesitant to go all in on saying that he’s gotten himself settled and this is the real Ristolainen that we’ll be seeing for the rest of the season, but at the very least, it’s a start.
Martin Jones comes up big again
And we’d be remiss if we didn’t note that Martin Jones was in again last night, and he once again had himself a very solid game. He didn’t have an easy time of it, facing 32 shots on goal in total, 10 high danger chances, and, you know, having to deal with Alex Ovechkin, to boot. But he handled all of that well, giving up just one goal on the evening, and really keeping things locked down for his team. The Capitals really worked to pull momentum back in their favor as the third period went on, and the skaters were having a bit of trouble dealing with that, but Jones was there to bail them out still. He had to make a few pretty huge saves to keep them in the game, and he did so with ease.
In short, he’s off to a really strong start to his season, and given his history we’re not really sure how it’s happening, but we’re certainly not going to question it. Knocking on every wood surface within reach and hoping he can keep this rolling.
Vibe check
Alright gang, how are we feeling? Let’s take a moment to take a step back and take the pulse of things around here. To recap: the Flyers played three somewhat uninspiring games in a row and looked like their offense was starting to stagnate. Then they went into Washington last night, faced off against a tough Capital team, and looked like they were getting themselves back on track again.
They’re 6-2-2 and third in the Metro (and just one point behind the second place Rangers, who have played two more games). Things may well be trending in the right direction again, and that would be good news, because on Wednesday they have the Leafs coming to town, who just picked up their fifth win in a row last night, and they’ll likely still be without Ryan Ellis and Kevin Hayes (who are close to returning but not that close). They’ll need to hold things together with the current group a bit longer, but the signs that they’ll be able to do that are encouraging again. ...