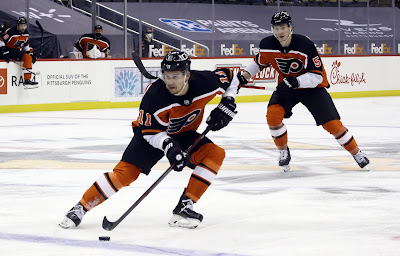 We're now less than one week from the start of the NHL season. Teams are finalizing their rosters and signing their RFAs, and players are biding their time until the regular season opens. In Philadelphia, the Flyers had a setback last year. Everything that went right for them in 2019-2020 seemed to go wrong, be it goaltending, injuries, or team consistency. The club that was once considered a dark horse Cup contender only a year ago has fallen out of favor. Luckily, the Flyers usually manage to make the playoffs every other year, so by that trend, this season should go well. Just to be safe, GM Chuck Fletcher went out and added a few pieces to make his club more competitive. Let's see how the roster is shaping up, starting at forward:Claude Giroux - Sean Couturier - Travis KonecnyJoel Farabee - Derrick Brassard - Cam AtkinsonOskar Lindblom - Scott Laughton - James van RiemsdykJackson Cates - Nate Thompson - Nickolas Aube-KubelGarrett WilsonMorgan FrostWade AllisonWith the injury to Kevin Hayes leaving him sidelined for at least a month and a half, the Flyers are a little weak at centre. Brassard is a good player, but he's a prototypical 3C, and leaving him in the top 6 will eventually start to cause problems. Giroux has played centre before, and while the Flyers might want to load up the top line for now, swapping Giroux down to the second line centre spot and putting Farabee in as the top LW may happen sooner than later. Meanwhile, Garrett Wilson is still waiting to see if he's earned himself a two-way contract, and the result of that will determine if he or Cates ends up filling out the 4th line. Morgan Frost was sent back to Leigh Valley, but so long as he has a good showing there he'll be the first call-up the Flyers make this season.On defence, the Flyers completely rebuilt their right side, to largely positive results:Ivan Provorov - Ryan EllisTravis Sanheim - Rasmus RistolainenKeith Yandle - Justin BraunAdam ClendeningCameron YorkSamuel MorinThe new additions of Ryan Ellis and Rasmus Ristolainen make for a much stronger top 4 than what Philly was working with last season. The left side remains the same other than the addition of Keith Yandle, a sneaky good player who can put up more points than expected and never misses a game. Once you get out of the already-solidified top 6 however, there isn't much in the way of backup players to fill in. Cameron York will start his year in Leigh Valley with Frost, but may also get called up if the Flyers don't like what they get from Clendening. Once Sam Morin recovers from knee surgery, he'll likely replace Clendening as the 7th defenceman.In net, the Flyers continue their search for a steady backup for their young starter:Carter HartMartin JonesFelix SandstromThe Flyers brought in Martin Jones after he was bought out by San Jose to be a mentor as well as a backup for Carter Hart, who is still just 23 years old. Jones has had it rough the last couple of seasons with the Sharks, but so has basically every player on that team. Playing behind a much more capable Flyers squad should help round him back into decent form, although you never know when it comes to Philly and their goaltenders. Felix Sandstrom gets a mention here, as he will likely spend the season playing in the AHL, but may get a call-up if either Hart or Jones are going to miss significant time.What do you think of this Flyers roster, and what would you change? Photo credit: Charles LeClaire-USA TODAY Sports...