Islanders News: To the streets of Philadelphia 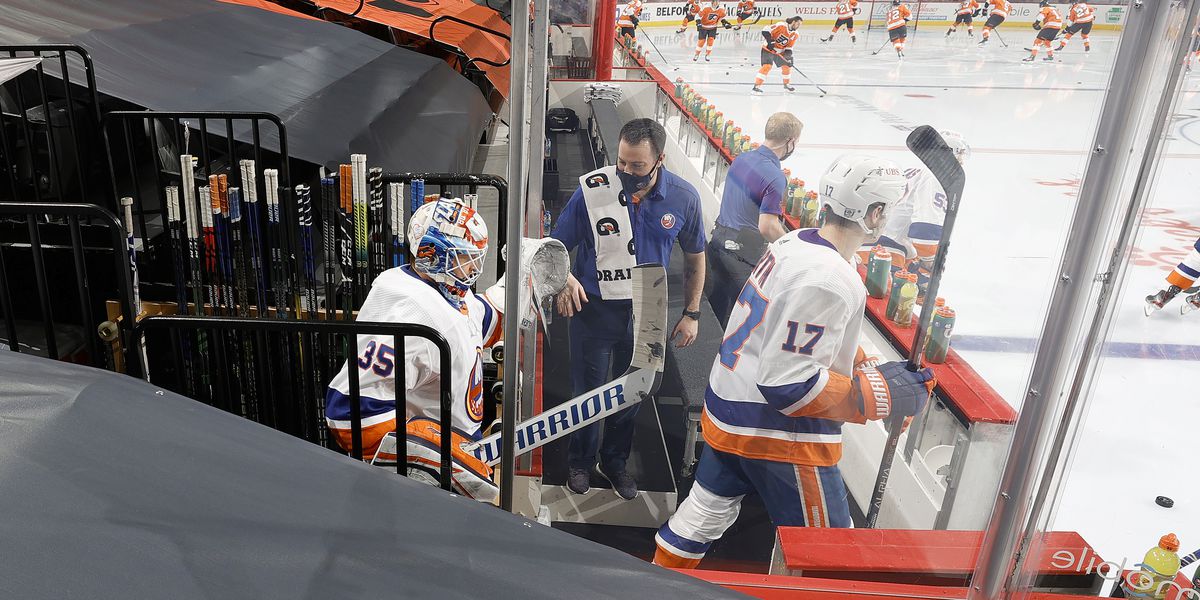 Cory Schneider in the house. | Photo by Tim Nwachukwu/Getty Images


The Islanders again send a road squad out for a preseason game while the rest scrimmage back home. The Islanders — well, a squad of them, anyway — are in Philadelphia for a preseason game tonight, while the rest of camp scrimmages back home.
Last season’s taxi goalie Cory Schneider will get some action in net.
For a few of the players headed to Philadelphia, we can perhaps infer that they impressed Barry Trotz on Sunday and will get a chance to further their case:


Barry Trotz said there were some players who played well on Sunday that #Isles want to get another look at tonight. Has a lot of nice things to say about Richard Panik, a guy he thinks he can play up and down lineup. Robin Salo also gets another chance tonight.— Andrew Gross (@AGrossNewsday) September 28, 2021

Here’s Barry talking about such things:

And here’s how to expect the Flyers to line up, including their new top pairing with Ryan Ellis:

You can find links and thoughts on what’s up with the Flyers over at Broad Street Hockey.
Meanwhile, back on the Island...

The NHL official site rolls its Islanders preview: Anders Lee’s return is key. [NHL]
It’s been such a journey for Zdeno Chara, between his beginning as an Islander and his late-career return. Steve Webb, Mark Parrish and Eric Cairns recall his early days. [Athletic]
The Isles aren’t sure how many defensemen they’ll carry. (Could Robin Salo carve out an opening?) [Newsday]
Greg Wyshynski of ESPN ranks all 32 goalie tandems and — influenced by discussions with goalies, coaches, and reviewing stats — declares the Isles #1. [E$PN]
Saturday’s preseason game in Bridgeport kicks off a trio of games hosted there, as a sort of formal opening to the “Bridgeport Islanders” era. [NY Sports Day]
Stan Fischler remembers Gerry Hart, the “heart” of the original Islanders. [Isles]
Zach Parise — who scored in today’s scrimmage — is settling in on the Island. [AM NY]
On lots of offseason changes of scenery, including Chara to the Isles and Hyman to the Oilers. [AP]

Raty Impresses with His Person and Game
Aatu Raty appears headed back to Finland soon — which was the plan all along — after making a very good first impression on the Isles brass.


Barry Trotz continued to sing the praises of Aatu Raty to me this morning. "We want him to get a good handle on the person and the player in that order. The person is good. We're really impressed with the person and his game has lots of substance."More on that later. #Isles— Joe Pantorno (@JoePantorno) September 28, 2021

Lehner Loves You, Islanders Fans
Robin Lehner still loves you. He fondly recalls the “special relationship” with Isles fans, who “saved [his] life” and made him love hockey again.

The Rangers’ newly constructed fourth line hopes it can be something like the Islanders’ Identity Line. [Post]
NHL talking heads “reveal” the top 10 players in the league. [NHL]
After a pandemic pause, the Metro Division is back, and judged to be the toughest division. [THN]
32 Thoughts Podcast on Jack Eichel, Canucks unsigned RFAs, and the open question of whether Travis Hamonic is going to play. [Sportsnet]
An interview with Hurricanes owner Tom Dundon, who returns Pierre LeBrun’s phone calls. [Athletic]
Jalen Smareck, the target of a disgusting racist taunt in the Ukranian Hockey League, is taking some time off: “I have been putting a lot of thought into what comes next for me in my career but as of right now I have decided that I will be taking a personal leave of absence from HC Donbass and I will not play another game in the UHL until Andrey Denyskin is suspended and removed from the league. Thank you.” [Sportsnet]
The Rangers will retire Henrik Lundqvist’s number this season. [NHL]
Speaking of former Rangers, Dylan McIlrath (remember him?) is suspended four games (two preseason, two regular) for a check to the head. [NHL]

Moment of Zen
Perhaps Kevin Poulin wasn’t ready to come into the game: ”That’s a tough one...”
...