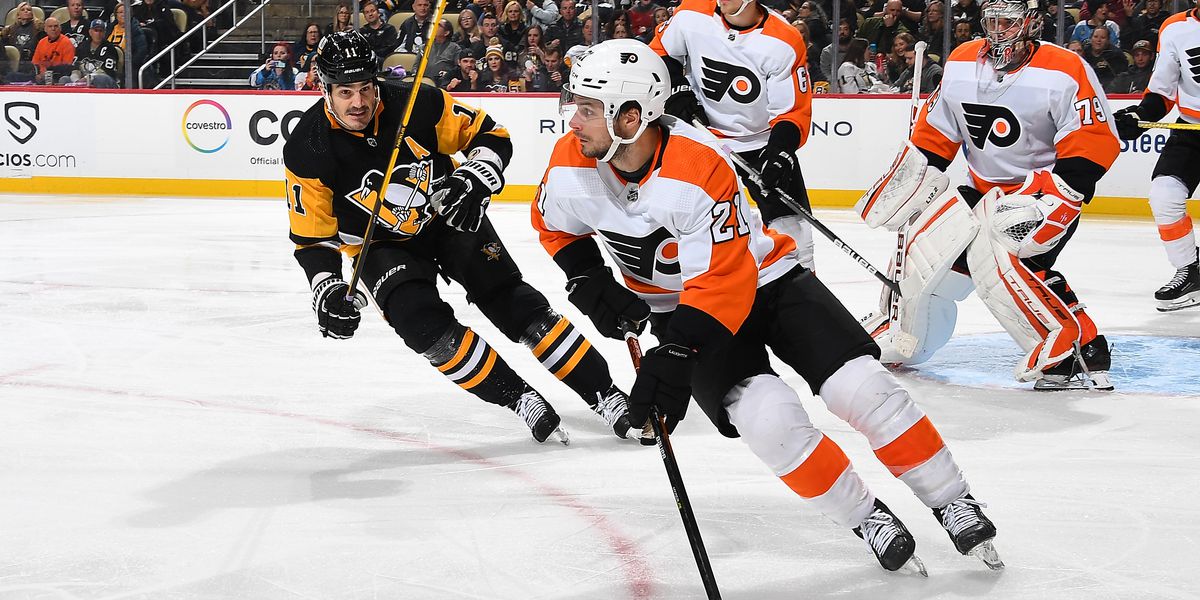 
Some observations for your morning... Well, folks, no sense beating around the bush. The Flyers faced off against the Penguins last night, a Penguins team without Sidney Crosby (COVID protocol), Evgeni Malkin (injury), and their head coach (also COVID Protocol), and things went just about as well as we could have expected. The Flyers looked flat for much of the game, but managed to mount a comeback to force overtime, but then promptly lost on a weird goal in overtime. At least there was a point managed to be picked up here, but the Flyers’ struggles are continuing.
All stats via Natural Stat Trick.
Messy, messy, messy (the reprise)
We talked after Tuesday’s game about how the Flyers put up, shall we say, not the cleanest showing, and we saw that roll into last night’s game as well (and indeed, probably get a little worse). The Flyers weren’t positively starved for chances in this one, with 56 shot attempts and 33 shots on goal at 5-on-5 alone, but we’d be hard pressed to come up with a lengthy list of times they looked truly threatening. Their passing wasn’t clean, and that had them left really struggling to get much going in the way of sustained pressure, and dangerous chances were relatively hard to come by. Add into that mix the defensive lapses and turnovers that plagued them in this one, and it’s not a terribly pretty picture. The Flyers, as we've said, have a tough slate of games coming up, and they’ve got some things they need to clean up ahead of them.
The power play delivers
If we’re looking for a bit of good news, though, we have it in the fact that the Flyers did get a bit of production out of their power play last night, and it was a big boost for them. Trailing by one as they approached the midway point of the game, the power play found a bit of magic and Travis Konecny picked up what very well might be the Flyers’ prettiest goal of the season to tie things up.

Despite that high note, though, it was a bit of a mixed bag of a showing for the power play. They had 5:17 of time on the man advantage, and outside of the goal, there wasn’t a whole lot going on for them offensively. They had six shot attempts, two shots on goal, and two high danger chances, and they struggled, as they did at 5-on-5, to sustain a ton of pressure. Pittsburgh’s penalty kill has been working well to start the season, so it’s worth noting that, but the Flyers are going to need to see a little bit more from the power play.
A quick note on line deployment
Maybe this is getting too far into the minutiae here, but we’re here with a quibble about line deployment. After the Penguins scored their second goal of the evening and the Flyers found themselves having to claw their way back out of a hole, Alain Vigneault opted to give the very next shift to his fourth line of Zack MacEwen, Nate Thompson, and Nicolas Aube-Kubel, giving them the chance to spark something and get the team back on track.
And here’s the thing. The fourth line did have some nice stretches of time spent in the offensive zone, and they almost had some very good looks! And we should give them credit where it’s due for that. But the reality is that they also lack close to any finishing talent, as we’ve seen so far this season wherein they’ve combined for exactly one goal (Thompson’s last week against the Oilers). There’s something to be said for wanting to get an energy line out there right away to try to spark something, but in this case, that something sparked almost certainly isn’t going to be the goal that they need.
Is this a massive thing to be fussed about, in the grand scheme of things? No. But it was certainly a choice, and not a good one, and it’s worth being aware of, in the event that it becomes a pattern.
Carter Hart’s interesting night
As our section title here suggests, it was indeed an interesting showing for Hart last night. He picked up a tidy little shutout against the Coyotes on Tuesday, and for that good work was given the nod to start again against Pittsburgh. He didn’t have to face those big guns in Crosby and Malkin, but he did still have a pretty substantial workload in this one. All told, he faced 36 shots on goal and 16 high danger shots, and he stopped all but three and two of them, respectively. He had a couple of slightly dodgy looking moments of his own, but on the whole, Hart was solid in this one, and there’s not a lot to be fussed about in this performance, even in a loss.
The overtime goal against was a tough one to give up, with the puck just sneaking over the line on the wraparound, but that also doesn’t erase all of the good work Hart did up until that point. In truth, he’s the only reason this wasn’t a blowout, and that the Flyers were able to pick up that loser point in the first place. This one easily could have been ugly, but Hart kept it within reach for the skaters.
Something’s gotta give
The Flyers are in a tough spot here. They’re missing two of their key pieces in Ryan Ellis and Kevin Hayes, and while they were coasting along for a bit and getting by okay without them, the rug is being pulled out from under them, and those losses are being pretty seriously felt. Particularly offensively, things have stagnated for the Flyers, and while they've still been able to put together some flashes of that greatness that we saw from them earlier in the season, they haven't been able to maintain it to the same degree. And Alain Vigneault has seemed a bit hesitant to toy with the lines up until this point—which isn’t a bad thing in an of itself, giving the lines a chance to get back on track on their own instead of conceding to a too quick to change trigger finger isn’t a poor play—but the time may be coming for him to try something. They have just seven goals in their last four games, and they aren’t really showing signs of being able to turn that around. Reinforcements may still be a ways away, and it’s probably not fair to bank on them either way, and regression is creeping up. It’s still early in the season, and we don't want to get too deep into the doom and gloom, but things are trending in the wrong direction here, and Vigneault is going to have to figure out some kind of shuffling to spark something, if he wants to get things back on track sooner rather than later. ...

Senators’ Formenton Has Cemented His Spot in the Top-Six 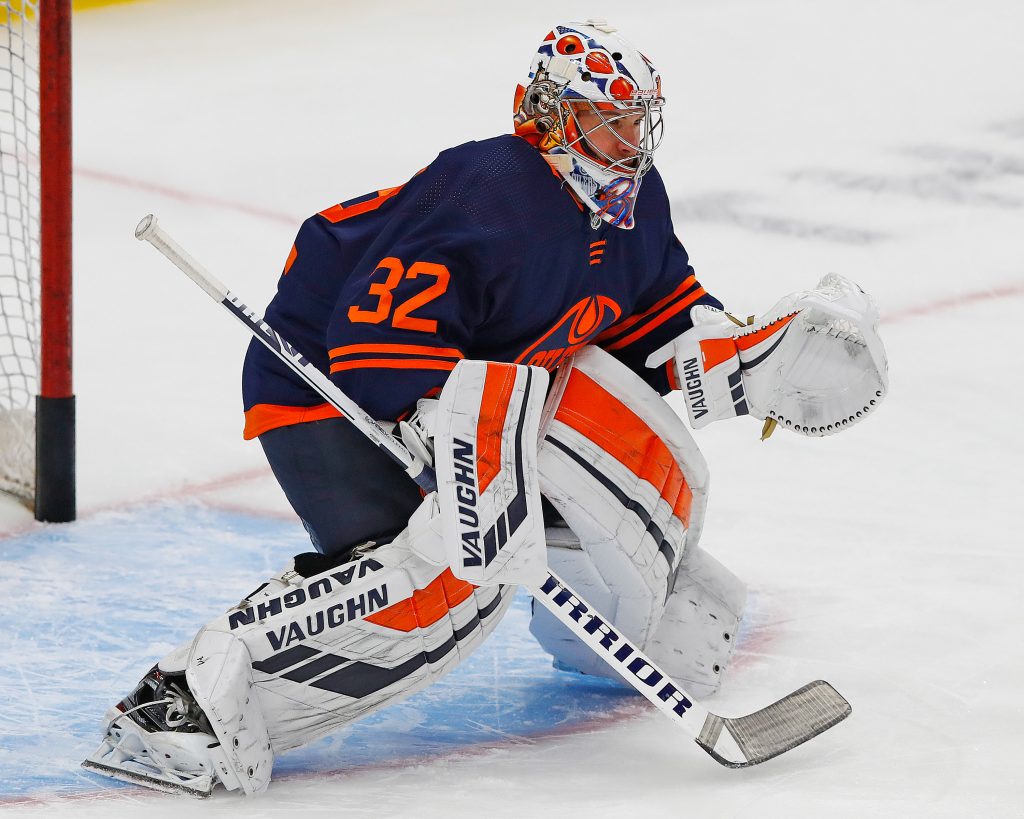 Why Oilers leadership needs to restore confidence within the dressing room