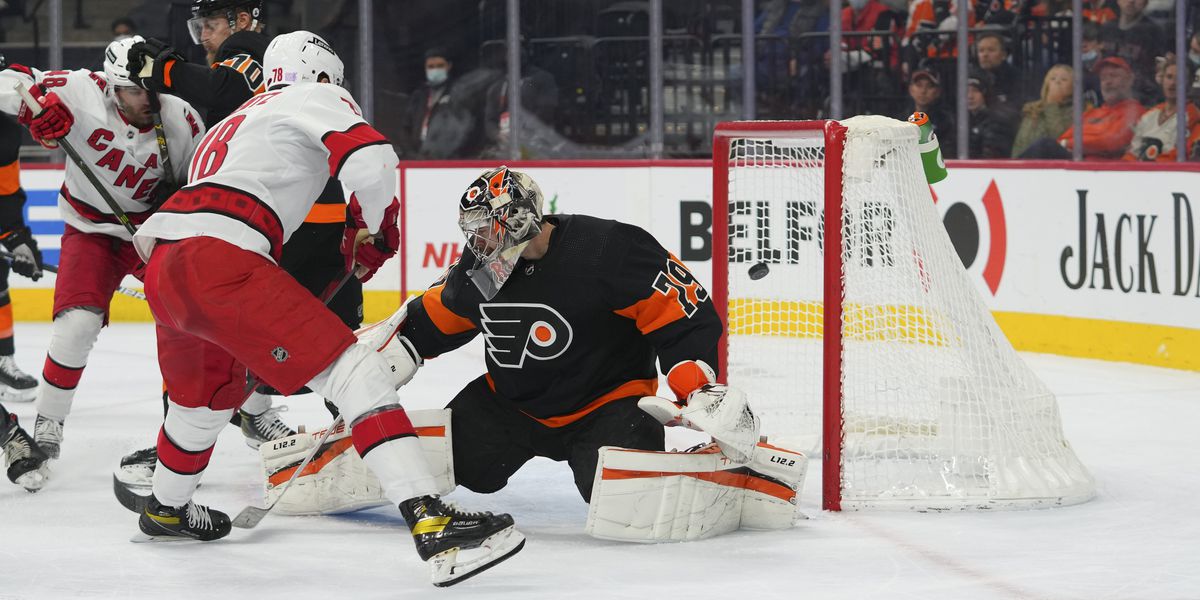 
Not great, folks. First Period
The Flyers needed to come into this game firing away on a strong Hurricanes team, and they ... well they kind of did.
Ivan Provorov scored after a sweet dish from who other than the captain, Claude Giroux. Carolina would challenge for goaltender interference to no avail, as the goal would stand and the Flyers would take the early 1-0 lead.

But the Hurricanes would storm back (you knew it was coming, shut up) and tie the game from an incredible wrist shot from Sebastian Aho. Aho received a pass from Teuvo Teravianen and went top shelf on Carter Hart from a somewhat difficult angle. Could Hart have stopped it? Probably, but sometimes you just gotta credit the shooter, and this is one of those times.
Another one of those times came with just three minutes left in the period as the Flyers were shorthanded and Joel Farabee went to work. He got the puck after a puck battle was won, made an absolutely dirty deke around the rookie forward playing point on the power play in Seth Jarvis, then beat Antti Raanta with a snipe. 2-1 Flyers and that’s how the game would go into the second period.

Second Period
Much like Provorov wasted no time to start the game, Aho wasted no time to start the second period. He beat Hart with a shot that deflected off of Rasmus Ristolainen’s stick, and just like that the game was tied right back up.
The Flyers would answer just under a minute later, however, and it was an absolute bomb. Ristolainen got the puck from Morgan Frost and unloaded on a clap bomb that put the Flyers back on top. It was Risto’s first in the orange & black and obliged every fan in the building ready to scream “SHOOOOOOOT.”

But a growing trend with this team, that needs to end sooner rather than later, is Alain Vigneault’s propensity to send the fourth line out there after a goal. It’s burned him multiple times this season, and it burned him again here. The Canes just out-worked the Flyers, got a couple of shots on that were stopped by Hart, but finally Jesper Fast buried the puck to tie the game yet again.
To this point, Carolina still had not taken the lead in this game at any point, but that changed with a tic-tac-toe goal scored by Jesperi Kotkaniemi at the 5:48 mark of the second period. The Flyers, in general, have been better defensively this season, but that was a total breakdown.
Now while this isn’t a direct reason the goal occurred, it certainly didn’t help matters. Scott Laughton got knee’d by Andrei Svechnikov a few seconds prior to the goal, like the most blatant knee anyone can think of, and there was no call. Sure, the Flyers probably don’t score on the power play anyway, but they at least go on one and the Canes probably don’t score when they did.
Then, later in the period, when you’d think there’s a time for a make-up call, instead the refs hand Zack MacEwen a double-minor for roughing instead of just matching two minute minors with Brendan Smith.
With just over 3:30 to go in the period, Steven Lorentz was given a day, a year, a century, you name it, to walk in on Hart and score. No one even in the vicinity of Lorentz who scored his third goal of the year, with two of them against the Flyers now. Fun times all around.
Third Period
The Flyers would generate a few decent scoring chances early in the third, possibly none better than the one from the fourth line on a nice find by Connor Bunnaman, but Nate Thompson (shockingly) failed to bury it. Svechnikov would score then just 4:50 into the final frame, and give the Hurricanes an insurmountable 6-3 lead for the Flyers to overcome.
The rest of this game was really a big nothing-burger, so that’s about it for today, folks. The Flyers drop to 8-7-4, and need to right the ship quickly before another season fades away. Yes, they’re missing their number two center, and one half of their top defense pairing, but every team has injuries.
The good ones find a way to win despite them.
...