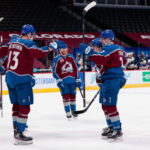 : Frank Seravalli on his DFO Rundown podcast said that pending UFA goaltender Branden Holtby’s playing career could be over. Holtby dealt with a nagging lower-body injury for much of last year, with his last appearance on March 4th. He was then put on the LTIR but was able to get back on the ice by the end of the year. Believe that the Avalanche and pending UFA defenseman Josh Manson are still talking but there may be some other moving pieces. One piece that they could look at trading is defenseman Sameul Girard and his $5 million cap hit....