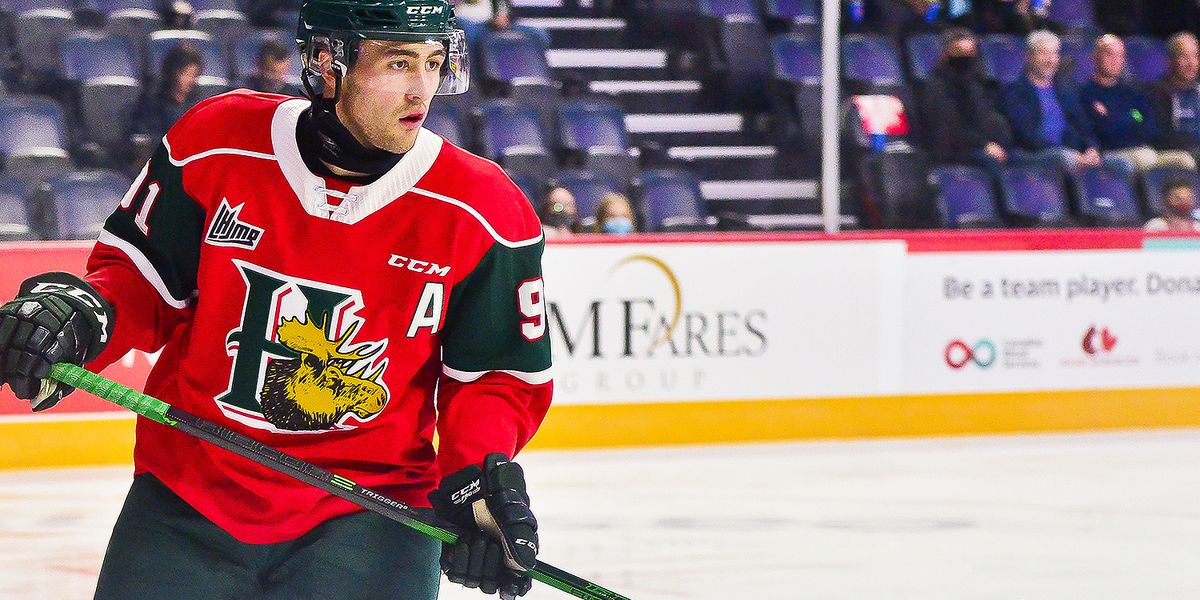 Desnoyers the Destroyer, trademark. No. 16: Elliot Desnoyers
2020-21 League/Team(s): Halifax Mooseheads (QMJHL) 2020-21 Statistics: 37 GP, 21 G, 28 A, 49 PAge: 19Acquired In: 2020 (Draft, Rd 5, 135 ovr)Ranking in Spring 2020 25 Under 25: N/A
How did Desnoyers’ 2020-21 hockey season go? Is his stock trending up or down from where it was entering the year?
Desnoyers had a terrific 2020-21. He massively improved his point-per-game ratio, scoring 1.32 points per game. He actually led his team in scoring, besting 2021 first round draft pick Zachary L’Heureux (Nashville). This is a massive increase in his offensive production from his last season prior where he only scored 0.57 points per game. At the time he was drafted, he was known as a primarily supporting player, a grinder who is defensively responsible and would play a scrappy style of hockey. While this can remain true, the boost in scoring could lead to Desnoyers becoming a steal for the Flyers at the position they drafted him.
What are we expecting from Desnoyers this season? What should we be looking for from him?
It may not be reasonable to expect Desnoyers to continue his offensive boom, but if he can maintain the level of production he had in 2020-21, upon his switch to Halifax, then his upside could be increased significantly. I’m not sure how the Flyers view Desnoyers, but ultimately on his trajectory, he could even become a good middle six forward.
How does Desnoyers fit into the Flyers’ long-term plans? Where does he stand in the Flyers’ organizational depth?
There are many talented young forwards already on the Flyers’ roster, let alone in the AHL. However, Desnoyers could bring a level of tenacity and talent that sets him apart from his age-related peers. He’s also more of a defensive forward than a two-way player, but that could change given how he’s performed recently. His style is all about fearlessness and tenacity, which the Flyers are bound to appreciate.
What do we think Desnoyers’ ultimate NHL upside is, and how likely is it that he gets to something approaching that?
Upon his draft, he was a prime candidate for a bottom six, grinding role in the Flyers’ forward corps. However, with his offensive game emerging, Desnoyers could even become a middle six forward and a great supporting player to the more skilled members of the roster.
Anything else?
Desnoyers has never scored as well as he did in both major junior and prior to that level, so it remains to be seen just how much of an offensive upside he has. Let’s hope the team has uncovered a diamond in the rough.