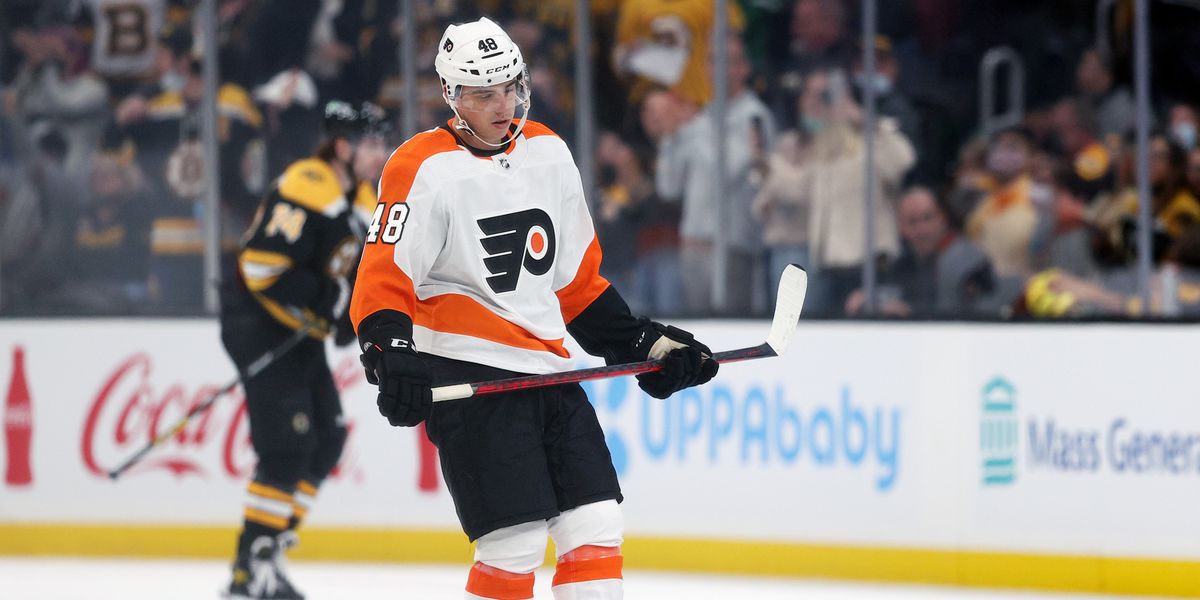 
The 22-year-old finds himself in a unique spot having fallen into a top-nine role despite having logged just two games in the last year. So here’s the thing about Morgan Frost through three preseason games — it’s too early to worry about Morgan Frost.
Now that the obvious is out of the way — and we can’t stress this enough — it’s just too soon to worry about Morgan Frost, we can delve into some of what we’ve seen from the play that suggests that you should…well, you get the idea.
For starters, the three games the 22-year-old has played in the last two weeks is more than he played all of 2020-21 — not including the lost workout time and bizarre rehabilitation schedule as a result of the COVID-19 pandemic. And we’re not even talking about a player with much NHL — or AHL — experience for that matter with 61 professional games under his belt since leaving behind a storied junior career.
What we are talking about, though, is a potentially dynamic offensive player who posted back-to-back 100-point seasons in the OHL prior to turning pro — and one who flashed with seven points in 20 NHL games in 2019-20. But we’re also talking about a player who had flaws when he was drafted, mainly on the defensive end and in terms of projecting his pace of play to the faster professional game. If those concerns weren’t there then for the Flyers — and other NHL teams for that matter — he wouldn’t have lasted that long in the 2017 NHL Entry Draft.
Then-Flyers GM Ron Hextall wasn’t tapping a sure thing with the 27th overall pick, he was tapping on a potential lottery ticket and banking on Frost being able to eventually adjust to the faster professional game, and bringing his high-end skill with him. Hextall knew it wasn’t going to happen overnight, and that the wait and the potential reward was worth the risk.
What the Flyers — and Frost — hadn’t counted on was him missing the better part of a season and a half of development due to injuries along the way. A shoulder injury robbed Frost in what could have been valuable development time last season as the Flyers had needs last season that were filled by young prospects on part with Frost, but the chances went to guys like Wade Allison and Tanner Laczynski while the former Soo Greyhounds star sat on the sidelines. Despite the lost time, Frost hasn’t lost backing within the organization.
Allison ran with his opportunity a season ago, but Frost has been presented with a perhaps even juicier chance in this moment as injuries to Kevin Hayes and Allison have opened the door to playing time — and in the top-nine no less.
It’s clear that Frost is trying to make up for lost time this preseason, likely squeezing his stick more offensively to prove he belongs. He even admitted that he pressed a bit in his first return to game action in over eight months, too.
But while he’s come up dry offensively in terms of production, the work he’s put into his all-around game hasn’t gone unnoticed — and should be factored into the equation instead of being written off.


Frost is pressing offensively; no rhythm yet, but made 3-4 good passes over last 2 GP. Nearly scored last night but denied point blank by Swayman off a great setup by Lindblom. What ppl aren't discussing: He's much improved defensively, and was even physical last night (4 hits).— Bill Meltzer (@billmeltzer) October 5, 2021

The scoring chance referenced above was a bang-bang play and really all about a being bested by a better save. Was great recognition by Frost to pick up on Oskar Lindblom winning the puck battle, hustling to the front of the net, and then reaching out for the chance. He also showed off his finishing ability later on in the shootout, which was needed for some reason.


No goal, but this feed from Oskar Lindblom to Morgan Frost was mighty arousing. pic.twitter.com/4uJNrmmMWy— Ryan Quigley (@TheRyanQuigley) October 5, 2021

Frost has also setup a few chances for his teammates off work along the walls, something that he’s had to learn a the professional level after mostly getting by with quick hands and slick moves at the junior level. He also did a nice job in the faceoff circle in his third game, something that he’s worked at and will need to continue to improve upon to help make his life easier.
And if things don’t get off to a great start, it’s not like Hayes isn’t a few weeks away from returning to his lineup spot anyways so it’s not like Frost’s play through the first handful or so games will make or break the Flyers’ entire season. The Flyers could also simply shift around their lineup a bit if the role appears too large for Frost to handle, knowing they’ve got options at center like Sean Couturier, Claude Giroux, Scott Laughton, Derick Brassard, and Nate Thompson. The ideal result would be a touted prospect finally getting an extended look at the NHL level in a role suited for him to succeed and him to do just that, but if it’s more seasoning he needs that so be it.
Sure we’d love to see Frost piling up points in these preseason games, but just because he isn’t doesn’t mean that he’s still not doing other good things. His first action in more than eight months was admittedly a struggle, but he’s rebounded with two solid efforts to follow and is doing the little things right that usually build towards something bigger.
Small sample size proof? At 5-on-5 in those three games, Frost has won both the scoring chance (14-13) and the high-danger chances (5-3) battles thus far per NaturalStatTrick. While it hasn’t shown up on the scoresheet, winning those battles isn’t nothing, and shows that Frost is contributing but just not generating results just yet.
If he keeps building his game shift-by-shift, period-by-period, and game-by-game, the results will come.
So put that panic button away for Morgan Frost at least, but probably going to want to keep the one out for Martin Jones — because yikes. 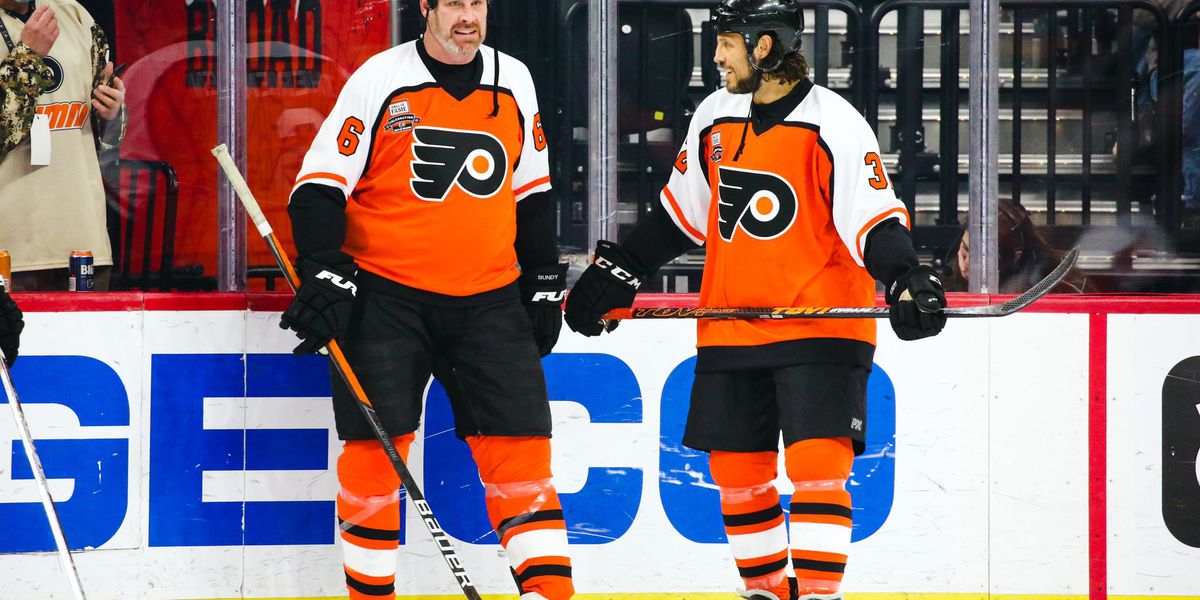 Yesterday’s alumni game is proof we need those jerseys back