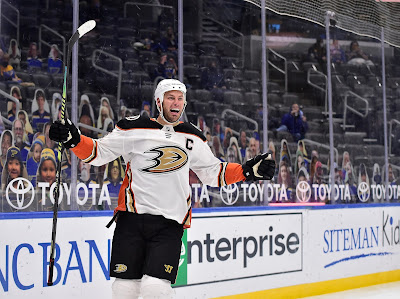 The Anaheim Ducks are going to play some risky business next week as they are letting their captain and Ducks legend Ryan Getzlaf test the open market. Quite the turn of events after we shared the report from earlier this week that surfaced suggesting the deal was basically done.The Captain Ryan Getzlaf not close right now with the @AnaheimDucks Other teams circling around his camp though. Has no problem testing the market. @MissinCurfew @SiriusXMNHL @stevekouleas— Shane O'Brien (@ShaneOBrien55) July 24, 2021This is either a great negotiating tactic in place from his close friend Shane O'Brien, or the fact is the Ducks and Getzlaf really aren't that close. The two have mentioned before they would like to carry on the marriage as 'Getzy' has family ties and roots down in California. After spending 15 years playing for the Ducks, could we finally see the veteran center in another uniform? If Getzlaf hits the market, there's going to be a long list of teams who could use him, and in very different roles. The contract offers would be quite diverse and it will be fascinating to watch. Free agency begins at noon on Wednesday, so expect to hear more about Getzlaf then.Photo credit: Jeff Curry-USA TODAY Sports...