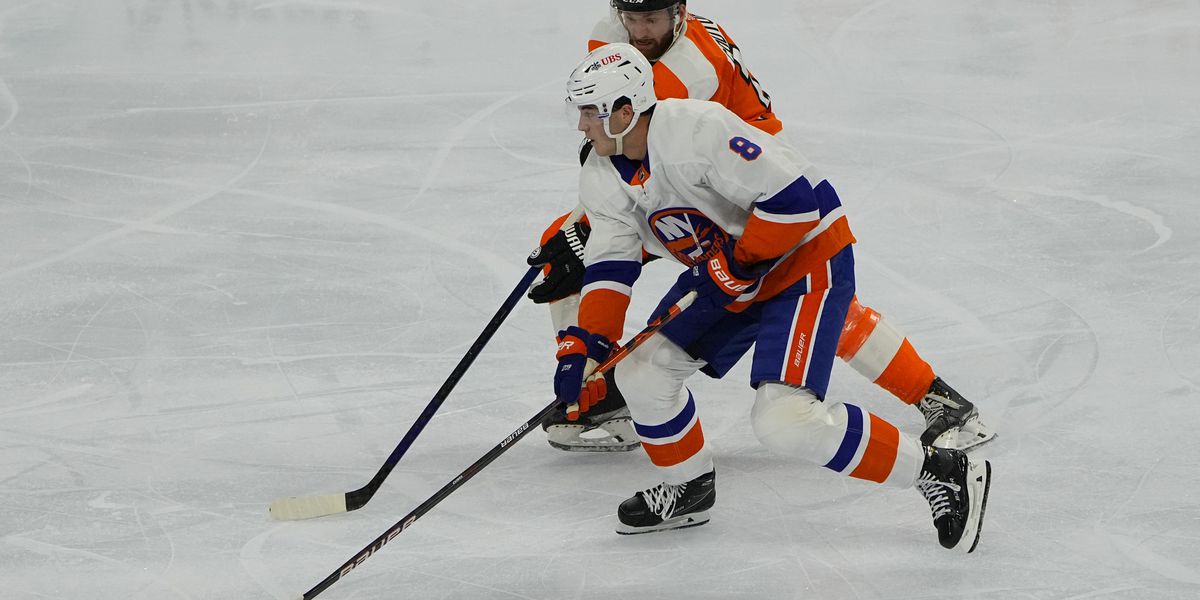 
Oh c’mon, the Islanders again? Really? Coming off of a second preseason victory against the Boston Bruins on Monday night, the Flyers are set for their penultimate preseason contest against the New York Islanders in Bridgeport, Connecticut. Who are the players to watch, what are the overarching story lines, and what kind of music awaits at the bottom of today’s preview? All of that (and more) below.

The Islanders
The Isles arrive in Bridgeport with their roster mostly solidified, outside of a few pieces here and there with the ability to be shuffled. Notably, standout prospect Oliver Wahlstrom has had a difficult camp according to those around the team. While it feels more likely than not that the talented shooter will make the opening night roster, there is a chance that he’ll be sent down given that he remains waiver exempt.
Another component of the lineup that may or may not be present heading into the year is the infamous Leo Komarov and his four year, $3 million AAV contract with a modified no-trade clause. Komarov was up and down between the AHL and NHL all of last year (given his awful contract, poor play, and the unlikelihood of him getting claimed, that tracks) but has a shot to make the team out of camp with Matt Martin still recovering from an ankle injury.


Photo by Len Redkoles/NHLI via Getty Images
Anders Lee might be back on the ice tonight. It’ll be nice to see that both of his legs work again, up until he scores a hat-trick.

Both of the aforementioned names are easily overshadowed by a possible returning figure: Anders Lee may or may not set foot on the ice tonight, the first time he’ll have done so in an NHL game since last season when he tore his ACL. That’s a huge deal for a New York team looking to rehab their captain and revive some of their scoring punch via his resurrection.
The Islanders are going to remain true to their Trotzkyist ideals, even if they’re not icing a full NHL team. This group will grind on the forecheck, penalty kill with stunning discipline, and create success on the back of winning puck battles and getting solid goaltending. The Flyers ought to consider this another learning moment in their ultimate quest to figure out how to counter this style of play when the games matter.
The Flyers
When facing down a group of Bolsheviks, it’s always good to have somebody like Nicolas Aubé-Kubel (of the NAKGB) along. The feisty winger bringing the right blend of ruthless aggression and skilled play is an encouraging storyline heading into the opening stretch of games, particularly given Philadelphia’s injury situation up front.
This game also might represent one of the last bits of latitude for Morgan Frost before he loses out on a roster spot. With a first-round, highly touted pedigree, the expectations for the young center have been tremendous; unfortunately, his performance thus far has been milquetoast at best and nebbish at worst. He needs to use the final two outings afforded to him as a launchpad into locking down a role in the NHL.


It's not that Morgan Frost is playing poorly all-around. But all too often it seems like he's going to where the puck is, rather than where it's going to be -- feels like a logical symptom of missing all the game time he has. Has him a tick behind in puck pursuit & on the attack.— Charlie O'Connor (@charlieo_conn) October 5, 2021

The line to watch tonight will be the Cam Atkinson/Derick Brassard/Oskar Lindblom trio, who have looked solid or better in every single game. Out of the three, Lindblom has easily been the most impressive, but Brassard hasn’t been too shabby either. The cog in this machine that might need a little WD-40 is newcomer Cam Atkinson, who has taken a little bit longer to get things going. His recent uptick in rush chances is hopefully a sign that he’s built up that chemistry the team is excited about finding.
Three Big Things

At this point, the goals for the Flyers are simple: get reps for the younger guys and fringe roster players, work out the kinks in special teams and transitional play, and avoid injuries. With Alain Vigneault clearly placing some distinction on keeping lines together and accruing compatibility, there’s not much else to do besides work on execution and get through these final days unscathed.
Countering forechecking teams is a work in progress for the Orange & Black, and getting New York in the preseason is a perfect scenario for this coaching staff to get reps and film on what works and what doesn’t in a low-stakes, high-accuracy environment. The Islanders won’t be playing nearly as hard as they will during playoff hockey or even the regular season; that much is clear. However, a Barry Trotz team going at 60% isn’t too far from what most teams look like going at 90%. Silver linings.
Seeing as this game will be unavailable on television according to what’s showing up on the official team websites, it’s a glorious occasion to revel in the sumptuous sounds of Tim Saunders and Coatsey calling the game on radio. Too often we overlook the magical qualities of removing the visual component of games and letting our imagination work in tandem with the voices of analysts and commentators, weaving our own version of the story. Enjoy it tonight.

Game Day Tunes
Feeling quite relaxed as I write this, so it’s time for our first jazzy piece of the season. Hope y’all like it.