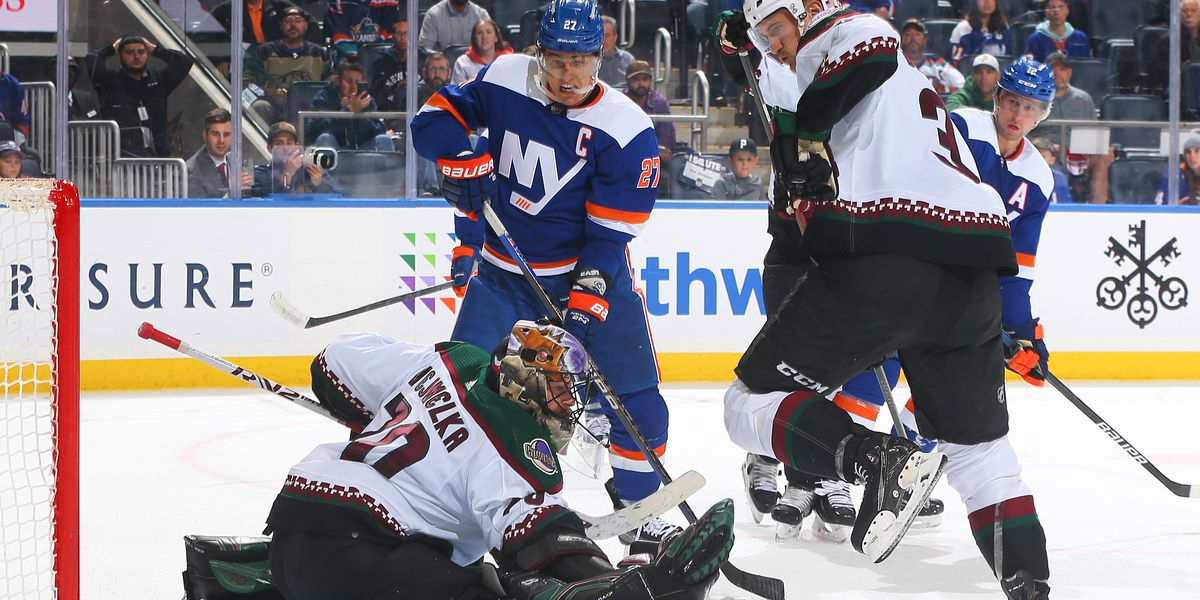 That guy. | Photo by Mike Stobe/NHLI via Getty Images


After some impressive two-goal comeback wins, the Isles can’t erase a measly one-goal lead. The New York Islanders fell prey to a motley “let’s show ‘em” Arizona Coyotes squad that has now won the first three games of its epic road trip, which should humble the Isles, who are off to a nice start after blaming last year’s lost season on a similar trip.
Czech goalie Karel Vejmelka was the hero, putting on one of the sterling performances he’s occasionally capable of despite underwhelming stats. But the Coyotes overall came to play, and this was hardly a case of an overmatched team sitting back and relying on its goalie.
The Coyotes met the Isles punch for punch, made it a difficult game, and converted the only power play goal of the game, which was the difference in a 2-0 win. They outshot the Isles, 29-24, and Ilya Sorokin was called on to make at least as many big saves as his counterpart.
But the Isles did themselves no favors by missing the net time after time on some prime chances (23 missed shots officially, with 5 each for Mathew Barzal, Ryan Pulock and Noah Dobson).
[NHL Gamecenter | Game Sum | Event Sum | Natural Stat Trick | HockeyViz]
First Period: This could be fun, but a little nerve-wracking
The first period was scoreless but some entertaining hockey, with both teams pushing the pace. There wasn’t a lot of sustained pressure in either zone, but lots of speedy counterattacks and transition play. The Isles benefited from a couple of power plays, one early and one at the midpoint. Mathew Barzal got an early shot on the first one but the Isles didn’t mount anything on goal afterward. The second one produced a handful of shots. Ryan Pulock also loudly clanged a bomb from the point off the post.
In between those power plays was an unremarkable fight between Matt Martin and Josh Brown after Martin crunched the defenseman behind the net.
Second Period: Things slow down
The second period was much slower, at times a glacial and monotonous pace. Shots ended up 9-3 for the Coyotes, who had the only one-plus power plays of the period. The first one was early, on an offensive zone interference call that Brock Nelson and Butch Goring alike protested.
Ilya Sorokin was key in keeping it scoreless, stopping a 2-on-1 and a 3-on-1. The latter was insane — there was no passing, but Sorokin stopped Nick Bjugstad with his blocker, then kept his upper body up enough while covering the pass to rob Bjugstad’s lifted rebound with his glove.
The second penalty call came late — too late for the Coyotes to convert in the second, but it led to critical damage in the third. In the final 20 seconds, the Isles were running around their zone a bit, and Josh Bailey got faked out of his pants at the blueline by Shayne Gostisbehere. Bailey reacted by putting his arms out to try to slow Gostisbehere, who went down easily to draw the call with seven seconds remaining.
Third Period: This stinks
With the bulk of that power play carried over into the third, the Coyotes went to work on fresh ice and converted. Travis Boyd converted from the doorstep on a nice cross-crease pass from the corner by Clayton Keller.
The Isles continued to press for another third-period comeback, but the Coyotes did not sit back and kept getting good chances of their own.
With just under 10 minutes left, Mathew Barzal was sent to the box for tripping on what might have been a slight trip, but was certainly an egregious parouette and dive by Gostisbehere. The ref bit on that so bad. Barzal, to his credit, raised his arms in disbelief and uttered a couple of words but went straight to the box. The Isles killed that one securely, but the clock was down to 7:33 when Barzal got out.
The Isles mounted good pressure and zone keep-ins late, both before and after pulling Sorokin for a sixth attacker. But Vejmelka was one better than Sorokin, including 11 saves in the third period.
With 30 seconds left Jack McBain iced it with a bouncing empty net goal from the center ice boards.
Up Next
The Islanders are home again Saturday to host the Columbus Blue Jackets, who are currently worse than the Coyotes, and just lost Zach Werenski, but knocked off the Flyers tonight.... 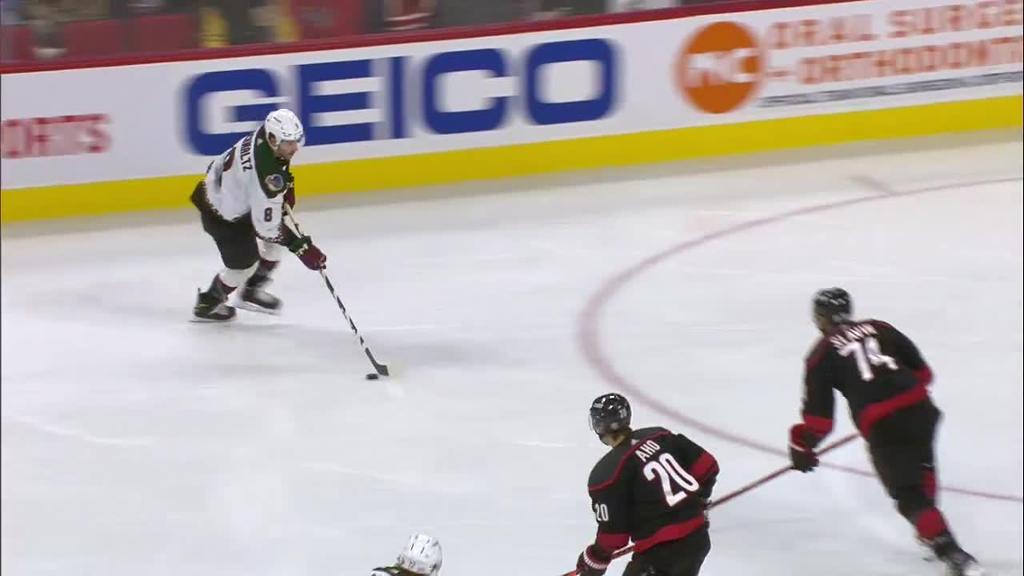