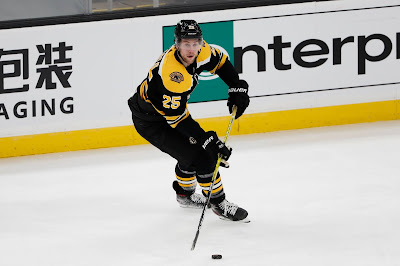 The Bruins have signed Brandon Carlo to a six-year extension. It carries a $4.1 million cap hit. The 24-year-old is an immensely important top-four defenseman for them. Thus, both the term and cap hit make a lot of sense. Carlo is noted for being a very reliable defensive defenseman and is the team's best one in that regard. In 27 games this season, he scored three goals and added an assist. Although those statistics may not look that great, offense is not what he is known for. With him still being so young, it is apparent that he also has tremendous upside for further improvement.Brandon Carlo, signed 6x$4.1M by BOS, is a one-dimensional shut-down #4 defenceman. #NHLBruins pic.twitter.com/TR7lE7uRQL— JFresh (@JFreshHockey) July 14, 2021 He did have two notable concussions this season, so that is something to keep in mind. Yet, every single time Carlo came back from injury, he was still just as solid on the backend.The Bruins have checked off one of their biggest off-season tasks and did a very good job at that. Photo Credit: © Winslow Townson-USA TODAY Sports...